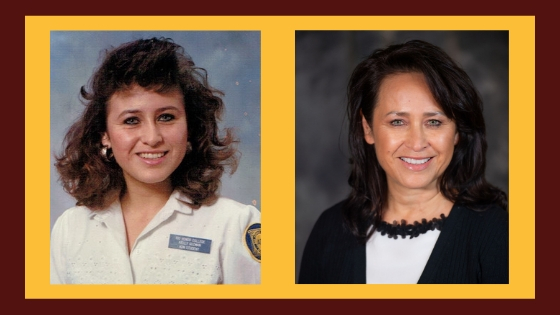 What led you to become a nurse?

I grew up and attended nursing school in Whittier, California where I earned my 2-year Associates Degree in Nursing in four short years. I originally aspired to become a marine biologist however, that required six years of school which seemed incredibly daunting at the time.  I thought that a 2-year program would be a nice bridge and allow me to work as a nurse while I finished school. (Ha!)

After I graduated and I was offered a job in a pediatric unit at a local hospital. It was the most difficult degree for me as I was learning a whole new language and at the same time learning how to navigate a new career. Talk about culture shock! I became the Pediatric/PICU supervisor juggling a combo of clinical bedside care and some administrative functions. This role inspired me to go back to school to earn my bachelor’s degree in nursing (Go Bruins!). During the program, I completed an internship in the Emergency Department (ED) and was immediately hooked on the excitement, so I transferred to work in the ED full-time.

The transfer to the ED was one of the most challenging experiences I’ve lived through. The hospital I was working at was in the heart of East Los Angeles and had a steady flow of sick patients.  I may have been in the same hospital but it was like night and day, from the patient population to the cultural experience. In my first month, I lost about nine pounds and contemplated if I was cut out for the work in the ED.

How did you make move from bedside to administration and eventually to transition and activation planning?

While I was in the Emergency Department, we had a series of leadership transitions and I was the supervisor of the department allowing me the opportunity to “fill-in” as the Director while a more permanent candidate was identified. I had a very progressive and supportive Chief Nursing Officer (CNO) who told me I could go to school full-time and remain as the Director. The college course program I was in was Nursing Administration, which aligned with my core work and helped me decipher the path of what a Director’s role and responsibilities were. I worked for several years as a Director in the Emergency Department and my responsibilities grew to include management of clinical departments. I was offered the opportunity to transfer to UCLA as the Clinical Director over ambulatory and interventional services, and I had to take it. UCLA, at the time, was building the Reagan hospital and I was asked to lead the Transition and Activation Planning efforts. My work on that project led me to the realization that there was a gap and a need for full-time Transition and Activation Planning Consultants. You could say, the rest is history! I have been working in this field for the past 15 years.

If you could give advice to your younger self, what would it be?